A new Atlas published today by the World Meteorological Organization (WMO) shows that a disaster related to a weather, climate or water hazard occurred every day on average over the past 50 years – killing 115 people and causing US$ 202 million in losses daily.

“The number of weather, climate and water extremes are increasing and will become more frequent and severe in many parts of the world as a result of climate change,” says WMO Secretary-General Prof. Petteri Taalas.

“That means more heatwaves, drought and forest fires such as those we have observed recently in Europe and North America. We have more water vapor in the atmosphere, which is exacerbating extreme rainfall and deadly flooding. The warming of the oceans has affected the frequency and area of existence of the most intense tropical storms,” he comments.

The number of disasters has increased by a factor of five over the 50-year period, driven by climate change, more extreme weather and improved reporting. But, thanks to improved early warnings and disaster management, the number of deaths decreased almost three-fold. 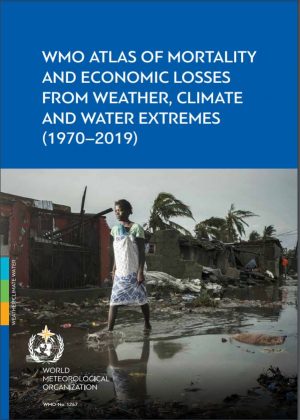 According to the WMO Atlas of Mortality and Economic Losses from Weather, Climate and Water Extremes (1970 – 2019), there were more than 11 000 reported disasters attributed to these hazards globally, with just over 2 million deaths and US$ 3.64 trillion in losses. The report is the most comprehensive review of mortality and economic losses from weather, water and climate extremes to date. It assesses the entire 50-year period as well as by individual decade.

More than 91% of these deaths occurred in developing countries (using the United Nations Country Classification).

The UN Office for Disaster Risk Reduction, which moves into WMO headquarters in Geneva on 1 September, and the World Health Organization contributed to the WMO Atlas.

“More lives are being saved thanks to early warning systems but it is also true that the number of people exposed to disaster risk is increasing due to population growth in hazard-exposed areas and the growing intensity and frequency of weather events.  More international cooperation is needed to tackle the chronic problem of huge numbers of people being displaced each year by floods, storms and drought. We need greater investment in comprehensive disaster risk management ensuring that climate change adaptation is integrated in national and local disaster risk reduction strategies,” said Mami Mizutori, Special Representative of the Secretary-General for Disaster Risk Reduction and Head of UNDRR.

“The overlap of the COVID-19 pandemic with many other natural and manmade hazards, especially extreme weather events during the last 18 months demonstrates the need for greater investment in disaster risk reduction and a multi-hazard approach to disaster risk management and early warning systems to reduce risks and strengthen preparedness for multiple disaster scenarios,” she said.

Seth Schultz, CEO, The Resilience Shift adds, “This report highlights how infrastructure must be prepared for the threats we can anticipate, such as the extreme weather disasters that are shown to be increasing, and respond to those we cannot predict or avoid, so that it continues to provide the essential services on which society depends. An urgent shift is needed in how we think about our infrastructure, and what must be done now to make it more resilient in the face of such growing uncertainties”.

More on this story at the WMO Media Centre